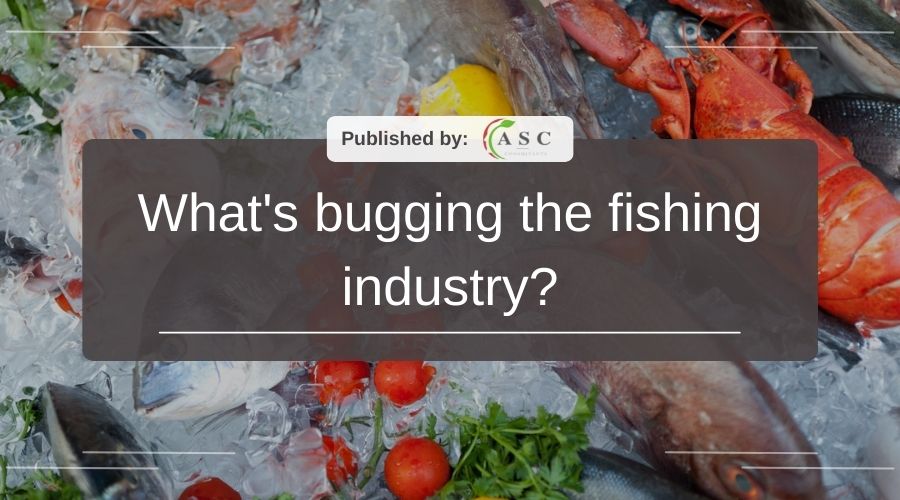 Fish and fish products are prone to contamination mainly due the physiology of fish species, their habitat and handling practices. It’s no surprise then that they contribute to a large portion of foodborne illness incidents contributing to, on average, 6-8 % of all annually reported outbreaks. This is more than twice the number of foodborne illnesses outbreaks caused by contaminated poultry meat (3.9 %). It is therefore important that we familiarize ourselves with what causes these foodborne illness so that we can put preventive measures in place.

Many factors contribute to high contamination levels in fish products, which mostly result from contamination caused by humans in natural water sources due to industrial and poor waste control practices. Water, in general, is also a suitable environment for the growth and passage of harmful microorganisms, which either make their home within free waterways or develop within the bodies of animals which live within these environments. As a food product, raw meat is also considered high risk due to its high protein and water content and moderate pH levels. This makes it a vulnerable target for microbial growth, and improper storage of the products inevitably results in the food becoming contaminated and dangerous within just a few hours.

In most countries, and with a specific focus on South African legislation and standards, there are applicable monitoring processes that apply to fishing practices and testing of caught fish to identify harmful contaminants in fish products. An overview of some of these practices and testing methods can be found in SANS 585: 2018. Besides this standard, other general hygiene practices are applicable (E.g. R638), especially for companies that process fish products after capture (processing will refer to any work done on the products such as cooking or smoking and including gutting, descaling, deboning etc. before sale). Before we discuss the different types of contaminants found in fish, it’s important to briefly discuss some of the more practical ways to ensure food safety when it comes to these products.

In most cases, the best advice we can provide is to use your intuition when buying or eating fish products. Question your provider and do not consume the product if:

With these in mind, it is always a good idea to have a quality assured supplier that you know either from observation, certification or word of mouth has a reputation for providing safe food products. Correct storage of fish is also a big factor. Most fish products you buy at a shop will be frozen, and these should be kept below -18oC consistently to prevent the growth of harmful microbes. If kept in a refrigerator, the temperature should not exceed 4oC, and the product should be eaten within a short time frame for similar reasons. You can find a more thorough list of guidelines in Regulation R638: 2018 of the Foodstuffs, Cosmetics and Disinfectants Act (No. 54 of 1972).

Fish should be cooked thoroughly to a core temperature of between 70-75oC for at least 15 seconds before eating and then stored at a temperature above 60oC. There are exceptions to this where raw fish is eaten, as with sushi and sashimi and using an assured quality supplier is the most important factor in the case of these products. General good hygiene practices will lower the chance of contamination and should always be kept in mind both as someone selling or consuming fish products.

Before we jump into it, it is important to note that there are different categories of contaminants, not just in fish products but in all foodstuffs. These can be classed as:

Physical contaminants refer to tangible objects which could cause injury if consumed. These can be external contaminants such as pieces of metal, plastic or glass, or a part of the product itself, such as bones or fins in the case of fish products. When selling fish products which might contain bones or fins, it is important to declare them on the packaging so that customers are aware of their presence. Specifications for this can be found in SANS 585:2018.
This article will focus more on chemical and biological contaminants in fish products, as these often present more serious health hazards in the industry.

With a specific focus on fish products, it is important to note that allergens are often given a class regarding contaminants due to their significant effect on the Food Industry. Allergens are substances or small chemicals present in food which can cause an immune response in certain people when eaten. This is known as having an “allergic reaction”. There are more than 14 distinct food allergy classes, with the most common ones (contributing to up to 90 % of all allergic reactions) being egg, milk, gluten, soy, nuts, fish and shellfish. Fish, molluscs, and crustaceans are all generally allergenic. Any product containing them should declare so on their packaging to ensure that allergic consumers are aware of this and legal requirements.

Industrial and mining practices have led to increased heavy metal content in waterways. While small quantities of these metals in organic states (bonded to compounds which render them inert) are mostly harmless, inorganic forms of these metals are incredibly toxic over long term exposure. They can cause damage to the nervous system, cardiovascular system and/or are carcinogenic.

The most dangerous inorganic metal forms are methylmercury (known to be a contaminant in fish products, especially predatory fish), hexavalent chromium and arsenic. All of these are found naturally in the environment, especially arsenic, which exists in low concentrations of drinking water. Still, human. Still, human practices have greatly amplified their levels over time. Heavy metals and some other chemicals will build up in the bodies of fish and other animals over time without being eluted from the body, increasing the risk of their tissue and meat containing high levels of contaminants the longer they are exposed to polluted sources. This is known as bioaccumulation. Bioaccumulation is also very dangerous when combined with biomagnification, which refers to when predatory animals (such as fish which feed off smaller fish: tuna, sharks and large finfish etc.) accumulate these chemical toxins from their prey increasing their contaminant content.

Dioxins (CDDs) and polychlorinated biphenyls (PCBs) are chemicals known to accumulate in fish products. CDDs are produced by industrial processes such as waste and oil burning and paper bleaching. PCBs were synthetic chemicals used in the production of dyes, plastics, and hydraulic equipment. PCBs have since been discontinued due to their harmful impact on the environment, but their traces can still be detected in waterways and some exposed areas.
When present in water, the chemicals actively transfer into organic matter due to their natural states, binding and building up in the fatty tissue and skin of fish and other aquatic animals. Bioaccumulation and biomagnification will both occur over time, and high levels of these chemicals can damage the immune and nervous system and play an impact on motor functions. They can also have a carcinogenic effect on people if consumed over a long period.

This class of contaminants usually refers to parasites that feed off fish which could be transferred to humans when consumed. Some of these can cause illness in humans, while others are undesirable and lower the quality of the meat. Examples include various species of fish tapeworms: Diphyllobothrium spp., fish/gill lice: Argulus spp., and water flukes (trematodes) which live some of their lifecycles within or on the bodies of fish. These parasites can be killed by freezing the fish post-capture or thoroughly cooking the product before consumption.

This sub-category of contaminants is the most extensive, mainly due to the large impact microbes play in causing foodborne illnesses worldwide.
There is a wide range of microorganisms which can contaminate fish products throughout the various stages of production, including before capture, during processing and sale. While these microbiological contaminants include microscopic parasites such as round and hookworms, mould, yeasts and viruses, bacteria are the main culprits behind fish spoilage and illness-causing contamination.

Polluted water sources can lead to fish being contaminated with pathogenic bacteria knowing to attack humans or produce toxins which cause illness in humans. This can arise if fish are harvested from polluted water or if the water used during processing is not of recognized quality or from a quality source. The biggest examples here are Vibrio spp. (V. cholerae is the bacteria behind the disease cholera), Salmonella spp., Shigella spp. and E. coli as well as Listeria monocytogenes. In addition, human handlers are a major source of these contaminants and others from unhygienic practices. Staphylococcus aureus is a bacterium that exists naturally on most humans’ skin, hair, and nasal passages. It can cause foodborne illness to certain vulnerable groups by producing toxins. Unclean storage locations and surfaces can present potential locations for contamination, as many microbes exist naturally in the environment and will grow exponentially when provided with a nutrition source. Other microbes include Streptococcus ssp., Clostridium spp., Campylobacter, Photobacter, Aeromonas spp., Erysipelothrix rhusiopathiae, Delftia acidovarans, Edwardsiella tarda, Legionella pneumophila and Plesiomonas shigelloides.

Many of the pathogenic microbes mentioned above are also classed as spoilage microbes, as they release enzymes that break down fish products as a food source, resulting in the release of foul-smelling and rancid compounds that cause the meat to decay. Most of the spoilage causing microbes are Gram-negative bacteria (both aerobic and anaerobic), and the most common culprits are Bacillus spp., Clostridium spp., Micrococcus, Proteus, Sarcina and Serratia. Specifically, raw, untreated fish can also undergo spoilage from the following bacteria species: Vibrio spp., Pseudomonas spp., Aeromonas spp., Moraxella, Acinetobacter, Flavobacter, Photobacter and Shewanella putifiaciens.

While foodborne illnesses usually accumulate in gastrointestinal stress and sickness, several fish products are known to cause an illness known as Scombroid poisoning. This is specific to fish rich in histidine amino acids, such as tuna, anchovy, mackerel, sardines and marlin. Spoilage bacteria break down the histidine into histamine amines, which are compounds released by the body during an allergic reaction. This causes an inflammatory response throughout the body, leading to dizziness, headaches, nausea, rashes, and others. Histamine is stable even at very high temperatures, making Scombroid poisoning a major problem in fish products. While proper cooking can destroy most microorganisms, histamine and other toxins produced by microbes can remain stable even when heated over a long period. Proper storage of fish products (as mentioned earlier) can ensure that these microbes cannot grow exponentially to cause illness.

Another major concern with these microbes is the increase in antibiotic-resistant strains. The widespread use of antibiotics in the modern era has led to increased trace antibiotics worldwide in water sources. Long-term exposure has enabled the growth of pathogenic microbe strains that can no longer be treated with specific types of antibiotics. Over the past five years, there has been an increasing number of identified antibiotic-resistant Salmonella spp., L. monocytogenes and Aeromonas spp. Isolates in contaminated fish products. These make treating infected people much more difficult if a foodborne illness occurs.

The Fishing Industry faces many challenges in preventing contamination of fish and fish products. These contaminants can be easily avoided through good hygienic practices and processes. In contrast, others are present because of external factors resulting from environmental contamination and poor industrial and societal practices. Fish is an incredibly popular protein source in diets across the world. To remain a sustainable food source, both the industry and consumers need to pay greater attention to their treatment of the product and the environment from which it is sourced. Unpreserved fish should be considered a high-risk food product and requires careful attention during all stages of production: pre-and post-capture, storage, processing and sale.