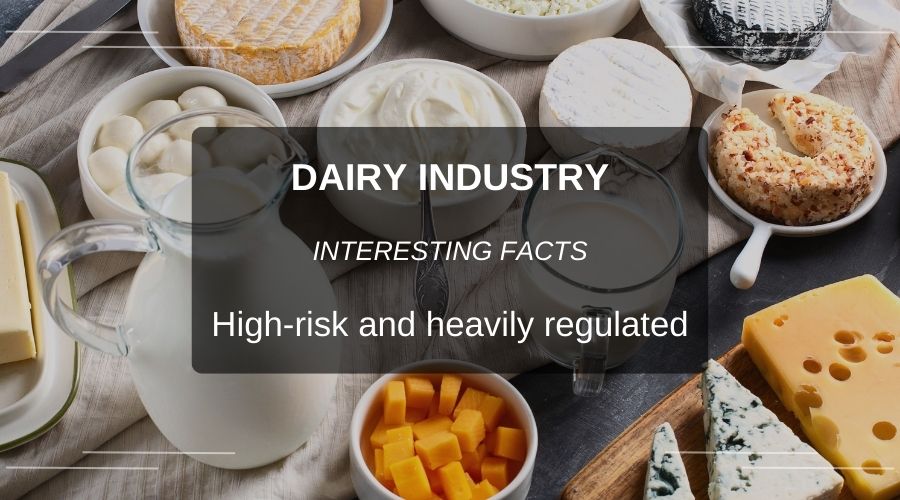 Milk and dairy products are a staple in most households. We use dairy as key ingredients in many foods and meals, as supplements in food products, and people drink milk on its own or in other beverages such as tea or coffee. Dairy products are incredibly rich in nutrients such as calcium, riboflavin, magnesium, vitamins, fats, and protein, filling an important role in people’s diets.

A few people realise just how much work it takes to ensure that milk is safe to drink in the food industry. As a raw, high-risk food, milk has a high potential for microbiological contamination and must be handled carefully to maintain its quality and safety before reaching the consumer.

Why is Milk a High-Risk Product?

Several factors influence a microorganism’s ability to grow on a type of food. The factors include oxygen, pH, Temperature and water activity.

Milk has many characteristics which make it a high-risk product. For one, dairy products are rich in protein content, one of the main nutritional requirements for microbiological growth. It additionally has very high water content and neutral pH compared to other foods.

Bacteria, the main culprits behind milk spoilage and poisoning, grow best in environments with high water content and neutral pH. You are more likely to encounter bacterial contamination in milk and soft cheeses. At the same time, yeasts and moulds, which can grow in acidic and drier conditions, are more likely to contaminate hard cheeses and dried milk products.

Milk spoilage is mainly caused by microorganisms, some of which can potentially cause foodborne illnesses in addition to ruining your foods. Other microbes are also known as pathogens, which actively cause illness and disease by attacking the host. Poor handling practices and sanitation are the main reasons behind contamination, and when these are combined with poor storage conditions and treatment, there is a massive potential for microbiological growth.

Milk comes from live animals, such as cows, sheep and goats, which naturally carry bacteria and other microorganisms on their bodies. If the animal has mastitis or a mammary infection, bacteria buildup in the teats could enter the milk before it is collected. Poor cleaning and sanitation before and during milking can also result in microbes on the animal’s skin, from animal dung or on milkers and handlers contaminating the product. Unclean storage reservoirs or transport vats are yet another means of milk becoming contaminated. For dairy products such as cheeses produced following pasteurisation, there is the additional risk of contamination from added ingredients.

There are many undesirable microbes which the dairy industry must deal with, but several are of a deeper concern than others. As mentioned before, bacteria are the main culprits behind both dairy spoilage and poisoning, and the following are microorganisms more commonly tested for in standard dairy industries:

LABs are a wide range of rod- and coccus-shaped gram-positive bacteria that ferment lactose proteins in dairy products, causing them to spoil. At the same time, many species occur naturally in milk. They are used commercially to produce dairy products such as cheeses, yoghurts, and maas, lack of control of these microbes results in ruined food unfit for human consumption. Examples of LABs include Lactobacillus, Leuconostoc, Pediococcus, Lactococcus, Aerococcus, Carnobacterium, Streptococcus and Enterococcus.

Enterobacteria are a group of mainly rod-shaped gram-negative bacteria which form part of the natural gut fauna of living creatures or can be found in the intestines of animals. Many species are harmless, while others can become pathogenic under certain conditions. Their presence in dairy products indicates faecal contamination from the milked animals or unhygienic food handlers.

Coliforms are enterobacteria and not innately pathogenic but are used as indicator microorganisms to test for those. Like lactic acid bacteria, coliforms can ferment lactose and are responsible for rapid milk spoilage. E. coli is a coliform that forms part of most animals’ natural gut fauna. Certain mutant serotypes or strains (E. coli 0157:H7) can produce shigella toxin, a biological chemical which causes gastrointestinal distress and bloody diarrhoea when eaten with contaminated food.

Salmonella is one of the leading causes of foodborne illnesses worldwide, with thousands of people being fatally infected annually. Infections result in gastroenteritis with symptoms such as diarrhoea, abdominal pain, fever and inflammation.

Listeria is a rod-shaped, gram-positive bacterium that occurs naturally in soil and waterways. It is the causative agent of the foodborne illness listeriosis. Much like Salmonella, Listeria infections have a high fatality rate, especially amongst vulnerable groups such as the elderly and very young. The bacterium is an intracellular parasite that invades and destroys the stomach and deeper tissue cells, causing symptoms such as gastroenteritis, sepsis and meningitis. There have been several reported incidences of milk and dairy products being contaminated with the bacterium worldwide over the past few years.

In addition to the bacteria mentioned above, other pathogens are closely associated with food poisoning in dairy products. These bacteria are thought to infect milk from unhealthy or dirty milk animals: Brucella species, Campylobacter jejuni, Coxiella burnetti, Mycobacterium Bovis and Yersinia enterocolitica.

Some microorganisms, like E. coli 0157:H7, cause spoilage and act as pathogens, producing toxins which are the main cause of illness. Besides LABs, the most common spoilage bacteria which produce toxins and impact the dairy industry are free-roaming Clostridium and Pseudomonas species and Bacillus cereus, which are present in the environment especially if effective cleaning is not performed.

The following moulds are also known to spoil dairy products and produce mycotoxins which cause gastroenteritis and other health conditions: Aspergillus spp., Fusarium spp., and Penicillium spp.

The Problem with Microbes

In most cases, microbiological contamination can be effectively prevented using basic food safety practices such as ensuring good personal hygiene, cleaning and sanitation throughout all stages of production, maintaining good temperature controls for storage and transport and effectively using control measures to kill contaminants such as with pasteurisation. However, some microbes are more challenging to kill or control than others.

Many of the microorganisms associated with dairy are psychotropic, meaning that they can grow and multiply at very low storage temperatures (below 7 Degrees Celcius), putting foods that would usually be considered safe during refrigeration at risk. Some bacteria also produce spores, enzymes and toxins that are heat resistant and can survive pasteurisation unless carried out at very high temperatures over extended periods.

Spoilage psychrotrophs notorious for these features are the free-roaming ones mentioned previously: Pseudomonas, Clostridium, Bacillus cereus, Streptococcus LABs and others.
Listeria monocytogenes and Yersinia enterocolitica are also known to be pathogenic psychotrophs.

How is Milk Contamination Prevented?

Due to its importance in the food industry, South Africa has several regulations and standards to control dairy products throughout all stages of production and processing to prevent contamination.

Dairy farms employ strict hygienic procedures to ensure that their milk animals and milk sheds do not risk contamination of their products. This is regulated by Regulation R961, which requires all milking facilities to undergo municipal inspection before they can be certified (with a document called a Certificate of Acceptability or CoA) for operation. For most commercially sold dairy products, automated processes are in place to identify potentially unsafe milk sources, for example, from animals with mastitis. Contaminated milk is thus monitored and discarded to avoid getting into bulk storage containers.

Raw milk is collected and transported under refrigerated conditions to milk processing plants, where samples are taken before and after processing to test for any possible means of contamination. Several testing methods for dairy safety and quality are described under Regulation R1555, including E. coli tests, somatic cell counts, alcohol tests, phosphate tests and others. Milk is also tested prior to processing for antibiotics and hormones.

At this point, Regulation R638 is applicable, a law governing hygiene practices for food processing facilities. Much like R961, R638 specifies the requirements these facilities need to meet under inspection from local municipalities to be accredited with a CoA, but this applies to other industries besides dairy. R638 additionally has an entire sub-regulation dedicated to the conditions of bulk milk tank storage and transport.

The first step in milk processing is pasteurisation, though some specialised dairy products such as cheeses may be produced using raw untreated milk. Pasteurisation is a process where milk is rapidly heated to kill any harmful bacteria or enzymes that may be present and then cooled for storage. The process increases the milk’s shelf-life and ensures that it is safe to drink for the consumer.

There are four currently recognised methods of pasteurisation used industrially, distinguished by the Temperature and time used to heat the milk, but several variations of these are used:

Almost all commercially used bulk milk tanks use a Clean In Place (CIP) system, which allows the pipes and vats in which milk is stored to be cleaned and sterilised through an automated process. This prevents the need to expose milk to the outside environment, where it can be contaminated after pasteurisation. After each batch, the CIP system flushes the pipes with detergent and sanitiser, using an aggregation mechanism to clean the interiors before rinsing them with hot water.
The milk does not come into contact with any external surfaces until it is bottled and sealed in sterile packaging, which usually includes glass or plastic bottles, plastic boxes, and sachets.

Milk which is to be used for yoghurt and cheesemaking is stored in separate vats to processed milk. These products are inoculated with microorganisms to initiate fermentation, causing the liquid to solidify and take on characteristic flavours. These microbes are usually pure, specifically prepared cultures of bacteria, moulds or yeasts that will not have competition for growth when added to the pasteurised milk. Often a starter culture will be inoculated into the product, and secondary cultures of other species can be used.

For yoghurts, lactic acid bacteria (LABs) are used to break down lactose in the milk, with the most commonly used species being Streptococcus thermophilus (used for its thermal stability) and Bifidobacterium, Lactococci and Lactobacillus species.

For cheeses, LABs are also used as starter cultures, with some types of cheese using moulds (e.g. Penicilliums, Geotrichums) and yeasts (e.g. Saccharomyces, Debaryomyces) as secondary cultures. Blue cheese, for example, is usually prepared with a LAB starter culture and the mould Penicillium Roquefort as a secondary culture, giving it the characteristic blue veins. Along with the type of milk used, fermentation time, and maturation period, the variations in what micro-cultures are used give each cheese its distinct flavour and textures.

Fermenting and maturing dairy products are stored under sterile conditions and frequently monitored to ensure no contamination or spoilage. Many of these microorganisms naturally cause dairy spoilage over time.

The dairy industry’s final precautions to protect its consumers are using sealed packaging and labels. Packaging is kept sterile and designed as a barrier between the product and the open environment. Labels on dairy products contain information about how they are to be stored (ambient or refrigerated) and what their best before dates are. For milk and yoghurts, these will specify their use-by dates once opened.

To preserve the freshness of dairy products, consumers should follow the manufacturer’s instructions and store them under the correct conditions. Use dairy products within their use-by dates and do not eat products with mould or fungal growth. For hard cheeses, moulds can be removed and still be safe to eat, but if wet moulds are observed on soft cheeses, it is safer to dispose of them.